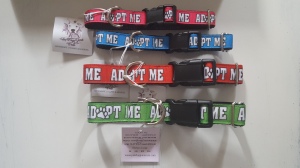 Bailey, not for adoption, but a great model!

Just Dog Gone Cute has over 450 items for sale including dog and cat collars, leashes, flower head bands and hats. You can find a collar or leash for any special need or occasion, like “Do Not Pet” or a “Happy Birthday” collar. The assortment is extensive, including holiday, wedding, patriotic and seasonal items. I was immediately drawn to the Adopt Me/Rescue/Blessed section as we want potential adopters to know that the dog is available, especially at adoption events and in public places like the pet store or park. These ADOPT ME collars help our foster dogs stand out in the crowd. 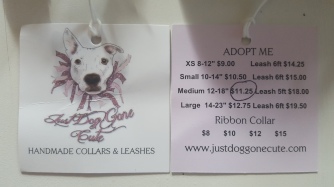 Just Dog Gone Cute’s collars arrived in adorable packaging. Each collar was individually wrapped in paw print tissue paper. A hand-written message was included, adding a personalized touch. The ADOPT ME buckle collars are so bright and fun! They are easy to adjust (remember to leave at least a two-finger width in between your pet’s neck and collar). They feel very study, but are soft against their skin. I feel confident that I could hand wash or put these in the washer (in a mesh bag on delicate) and they will stay intact. (Bailey and my foster dogs love to play in the dirt, so a washable collar is important.) Heath, my foster dog, was show stopping in the green collar. It really stood out against his shiny black coat.

Heath, in a green ADOPT ME collar

I love how Just Dog Gone Cute has a variety of color options: yellow, pink, red, orange, light and dark purple, green, and blue. There are a wide range of collars (extra small through large), buckle, martingales (fabric or chain), and leashes (four through six feet, one sided or double sided). You could also purchase a ribbon collar or just the ribbon only.

An English idiom says it best, “A picture is worth a thousand words.” Realm of Vibes and Caring Canine Connections thank Kelly for donating the super cute ADOPT ME collars. They are giving a fresh, lively look to the foster dogs in our care. In addition to shopping at Just Dog Gone Cute on Etsy, make sure you like Just Dog Gone Cute on Facebook!

Would your business or service like to be featured on Realm of Vibes? Please visit the Collaborate page or e-mail realmofvibesdg@gmail.com to get started.

Disclosure: In return for donating collars to Caring Canine Connections, Just Dog Gone Cute is featured on Realm of Vibes and social media platforms. Although collars were received complimentary and as a donation, all opinions within this post are honest and authentic. Caring Canine Connections could benefit from donations to aid in the care of our foster dogs. Please support artists, small businesses, and rescue organizations. Make the world a happier place! Namaste.

KiKi after her first bath ever

I had a slice of American cheese in my hand. I was laying prone down my foyer stairs trying to coax KiKi, my Akita/Belgian Malinois foster dog up the stairs.

The owner of the rescue came to my house with her Suburban full of dogs. She wanted to make sure that whichever dog she gave me got along with my dog, Bailey. When I met KiKi, she pressed herself up against the crate, indicating she was scared and not wanting to leave her safety zone. I turned to the rescue owner and said “You get her out! I’m not! She’s going to bite my face off!” With lots of coaxing, a calm voice, treats, and gentile manhandling, KiKi was free from the confines of the crate and on a leash. We took a quick walk to make sure her and Bailey were friendly enough to be off leash in the backyard. Bailey ambushed her, but KiKi looked to Bailey as a big sister, showing her the ropes of our palace.

KiKi was a dog from the South. I knew nothing of her background, so I formulated a story in my head. KiKi was an outside dog, she was never inside a home because she didn’t know how to go up and down stairs. A toy was a foreign object, one that peaked her interest, but she would approach cautiously, unsure of the toy’s intentions. She didn’t trust humans, either. Whoever had her, was a prick. She wanted nothing more to be outside. That is no life for a dog. Bailey, Ace, and Jack (my furfamily) are treated better than some humans. I love them more than myself.

The first night with KiKi was one for the books. We live in a bi-level, so stairs are a necessary evil. There is 7 steps to the front door. Once inside, you can either take 7 steps upstairs or 5 steps downstairs. KiKi entered through the downstairs entrance, and that is where she remained. She was not going anywhere near the stairs. She went outside and inside through the downstairs entrance only. I thought to myself, “How can I turn this outside dog into an inside dog?” She wasn’t fond of the crate (again, outside dog mentality), so I laid a warm red blanket down for her on the floor. She wouldn’t eat, wouldn’t drink water, and would just stare at me, as if to say, “What am I doing here?” I was heartbroken. She looked so sad. She wanted nothing that I had to offer. I slept with her on the red blanket. I just felt like she needed someone on her side, to know that I was there, with her food and water, and that we were going to get things right. She was in my care, and I was going to protect her and get her adopted to a good home. 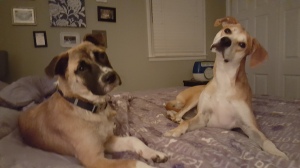 KiKi & Bailey, the Queens of the Castle

One of the most challenging things I had to do was teach KiKi to go up and down the stairs. Not only did we have to master the inside stairs, but we had to master both sets of outside stairs. I think I learn something new every time I have a foster dog that can’t do something. I tried putting Pupperonis on each step. No cigar. She would just eat the treats on the first two steps and then run away. I tried having Bailey be the example. “See! Look. Bailey! Come.” Bailey would run up the stairs and I would give her a pet and a treat. KiKi would whimper in disgust and aggravation. I tried placing her gently on the steps, in which she would shake, and it no longer became a positive, happy experience. So, I laid prone on the steps with cheese in hand, and Bailey next to me for moral support. Nope. She wouldn’t budge. I got Jason to lay prone and hold cheese, and I guided her legs up the stairs. Finally, she did it. And we practiced, and practiced, and practiced some more. Two hours later and we had KiKi running up and down the stairs. Positive reinforcement. Success. It took another day to teach her how to go up and down the outside steps. Baby steps.

KiKi had an application for adoption. The man walked many miles each day and wanted a dog to walk well with his dog. KiKi, thankfully, was amazing on a leash. After almost six days with me, she was a new dog. She pranced. She slapped her paws against the ground, happy to be alive. She saw me get the leash out of the closet and would run down the stairs by the door. I loved taking her on walks because we were both in our happy place; me, getting my exercise outdoors, and her prancing down the street, sassy as ever.

I don’t know the rest of KiKi’s story. Some of the adopters and I keep in touch through text messaging or social media facets, but KiKi’s life is a mystery. Last I heard, her family loved her, and that she was walking miles each day, happily, with her canine sibling.

Whether it takes me two hours guiding a foster dog up the stairs to get her to the American cheese prize or sleeping on a blanket on the floor, I will do anything to make these dogs feel safe, happy, and alive. I get unconditional love, and gratitude for life, and they get the skills they need to become an adoptable, well behaved canine companion. Happy trails, KiKi. Win-win for all. 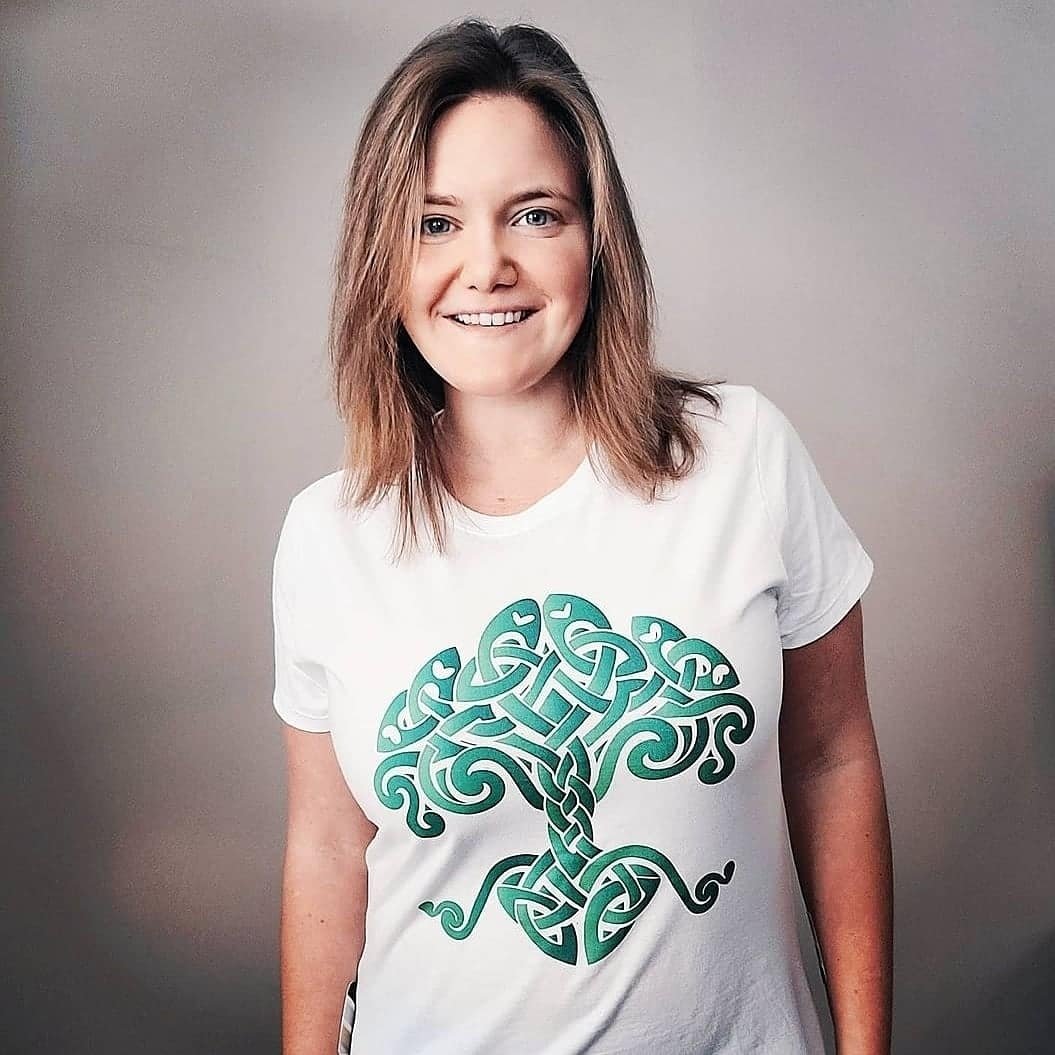 realmofvibes.com is a participant in the Amazon Services LLC Associates Program, an affiliate advertising program designed to provide a means for sites to earn advertising fees by advertising and linking to Amazon.com.

Realm of Vibes contains my honest opinions and sometimes, the opinions of others through guest posts. Any information contained within is provided to the best of my knowledge, but may have errors, omissions, and mistakes. Realm of Vibes is for entertainment purposes only, and no information is to be taken as professional advice. If you try or buy anything from Realm of Vibes, you do so at your own risk. I reserve the right to change the content of Realm of Vibes at any time.
Loading Comments...
%d bloggers like this: