30. I’m 30. I am 30. Thirty. The big three zero. Three. Zero. Ugh. I can’t believe I am thirty. This birthday feels different than previous years. I am now checking the mirror every day to see if my first gray hair decides to sprout from my scalp. Am I really getting old? I work with old people. They are old. I am young. Or am I? 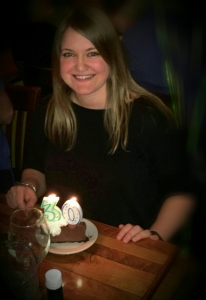 I feel mixed when I look back at my twenties. I feel like it was a very trying decade…

In 2007, I was still pursing my undergraduate studies at East Stroudsburg University. I was in a sorority and I worked hard to party harder. In some ways, I miss college. I often tell my cousin, who is in her first year, to enjoy every second. She will never get those days back… the days of rolling out of bed, going to class, and working a silly on-campus job to pay for beer money for the weekends. College was a time where I developed my independence and friendships.

In 2008, I graduated with my Bachelor’s of Science in Exercise Science. I took a semester of pre-requisites and had Plans A, B and C ready if I didn’t get into graduate school.

Plan A – Get into graduate school for Occupational Therapy

Plan C – Go to school for something else

I was working full-time as a nanny and promotional model for liquor companies. I was in the clubs until 2 AM helping the bartenders serve shots of the brand I was promoting and handing out t-shirts to consumers. I helped the children in my care learn to tie their shoes and ABCs. I studied every minute I wasn’t working. Even when I was doing my internships, I was operating on four hours of sleep. My routine consisted of waking up, exercising, going to school, going to work, repeat. I was like a robot. Operating in auto-pilot was my norm.

In 2010, I met the love of my life. I quickly became a police officer’s girlfriend. Associating yourself with a police officer holds you to a whole slew of standards; standards that I never knew existed.

I moved out of my parents’ home and into Jason’s apartment in January 2012. Jason taught me everything from paying bills, to grocery shopping, cooking, and doing laundry. I started #adulting. We purchased our home in September 2012. We were now homeowners. We were building our nest through YouTube videos, paint colors, and furniture shopping.

I graduated with my Master’s of Science in Occupational Therapy (I am the first person to do so in my family) and stated my career on October 8, 2012. I went from student to clinician. Another new role. I held my first real full-time job.

Traveling was one of the most magical experiences of the past decade. In 2008, my dad, mom, sister and I visited Punta Cana. Girls’ trips took place to New Orleans, Myrtle Beach, and California. In 2010, Jason and I went to Bradenton Beach, FL. We also visited Boston, Cape Cod, Ocean City, Maryland, Vermont, New Hampshire, Montreal, and Antigua. In 2015, we had our first Euro trip to London and Paris. Vacations keep me motivated in life. A quotation has been floating around stating, “Create a life you don’t have to take a vacation from,” but nothing beats being on an island in the Caribbean drinking a fruity high calorie beverage in my bikini. #sorryIamnotsorry

So, did I figure it out in my twenties? Maybe. My 20s were filled of new roles and change.

Maybe I figured out what I really want out of life. Maybe I stopped caring about what you, and anyone besides my husband, mom, dad, or sister really thinks.

I realized that I don’t want to be at the bar until the early morning hours. I want to be home in my husband’s arms and my dog snuggling at the bottom of my feet. I want to drink a big glass of wine, watch Netflix, and make it to hot yoga class the next morning. I have learned to take better care of my physical, mental, and emotional health.

I am lucky to be relatively established in my career; although I switched jobs many times, I love working as an occupational therapist in home care. I love my chosen career and enjoy making peoples lives easier from my therapeutic interventions.

I plan so many things, and God laughs, so I learned to let what is, be.

To my thirties: to another decade of health, happiness, and success.

This site uses Akismet to reduce spam. Learn how your comment data is processed.

realmofvibes.com is a participant in the Amazon Services LLC Associates Program, an affiliate advertising program designed to provide a means for sites to earn advertising fees by advertising and linking to Amazon.com.

Realm of Vibes contains my honest opinions and sometimes, the opinions of others through guest posts. Any information contained within is provided to the best of my knowledge, but may have errors, omissions, and mistakes. Realm of Vibes is for entertainment purposes only, and no information is to be taken as professional advice. If you try or buy anything from Realm of Vibes, you do so at your own risk. I reserve the right to change the content of Realm of Vibes at any time.
Loading Comments...
%d bloggers like this: